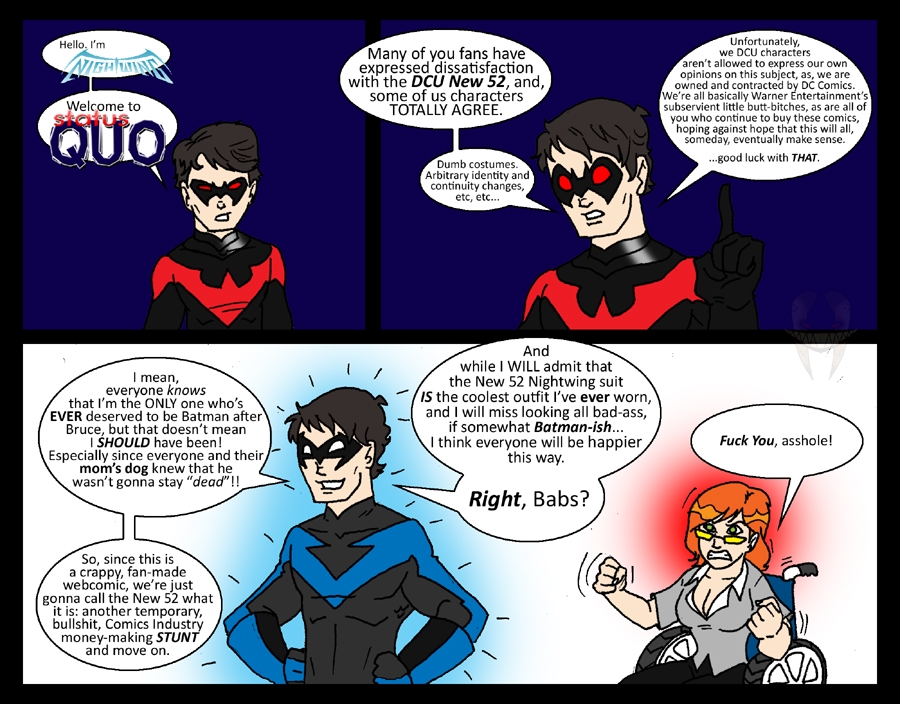 This comic is from back in late September of 2011…
I, being the grumpy comic book fan that I am, was not happy with the New 52.
I still ain’t. I gave ‘em a fair chance, though.
I figured that if they couldn’t do right by my favorite characters, then, I wouldn’t waste time and money on the rest of the line.
I was unimpressed with Nightwing. It was OKAY, but even before the 52 reboot, DC hasn’t really known what to do with Nightwing, so New52 giving him a spiffy new suit, but no real identity of his own out of Ol’ Bruce’s Bat-Shadow really didn’t surprise me. (Nowadays, he is apparently some kinda spy(?) He goes by his real name, but, for some reason has an actual “G” insignia on his chest? WTF?!)
Static came and went with no real fanfare and nothing of note but a gaudy new suit and an arbitrary move to New York. 8 issues later… GONE. Right on the heels of Dwayne McDuffie’s death, which made the whole experience even more unseemly.
Flash looked pretty, at least, and I will admit to liking Captain Cold’s new look, but, and I know this is silly, I blame Flash for the whole Screw52 fiasco. Not Dan Didio. Not the DC Marketing department, but, Barry Allen himself. Add to that the continuity-wipe of Wally West (MY Flash, and the Flash for 25 frickin’ years worth of Flash fans) right out of existence. (We’ll touch on that a few strips down the line)

DC fucked up 3 of my favorite superheroes. Not to mention what went on with Barbara Gordon, The “blending” of Wildstorm and Milestone into the DCU, but only to cherry-pick a few characters and let the rest of those universes twist in the wind, Earth 2’s Alan Scott, etc… I dropped the entire line like a hot brick right after with very little remorse.
I decided that I was gonna vent my comic bile ducts by doing what I do best. Unfortunately, life got in the way, as it often does with me, and only one comic was produced. This one.
However, This version of ‘Back To Status Quo’ briefly spawned a different version, and then a different tweak on it, which will be seen here, later. Enjoy!
============================================================
Nightwing acts as a mouthpiece about the New DCU 52.
Barbara “Oracle, Dammit” Gordon seems a bit nonplussed.
Characters by DC Comics/Warner