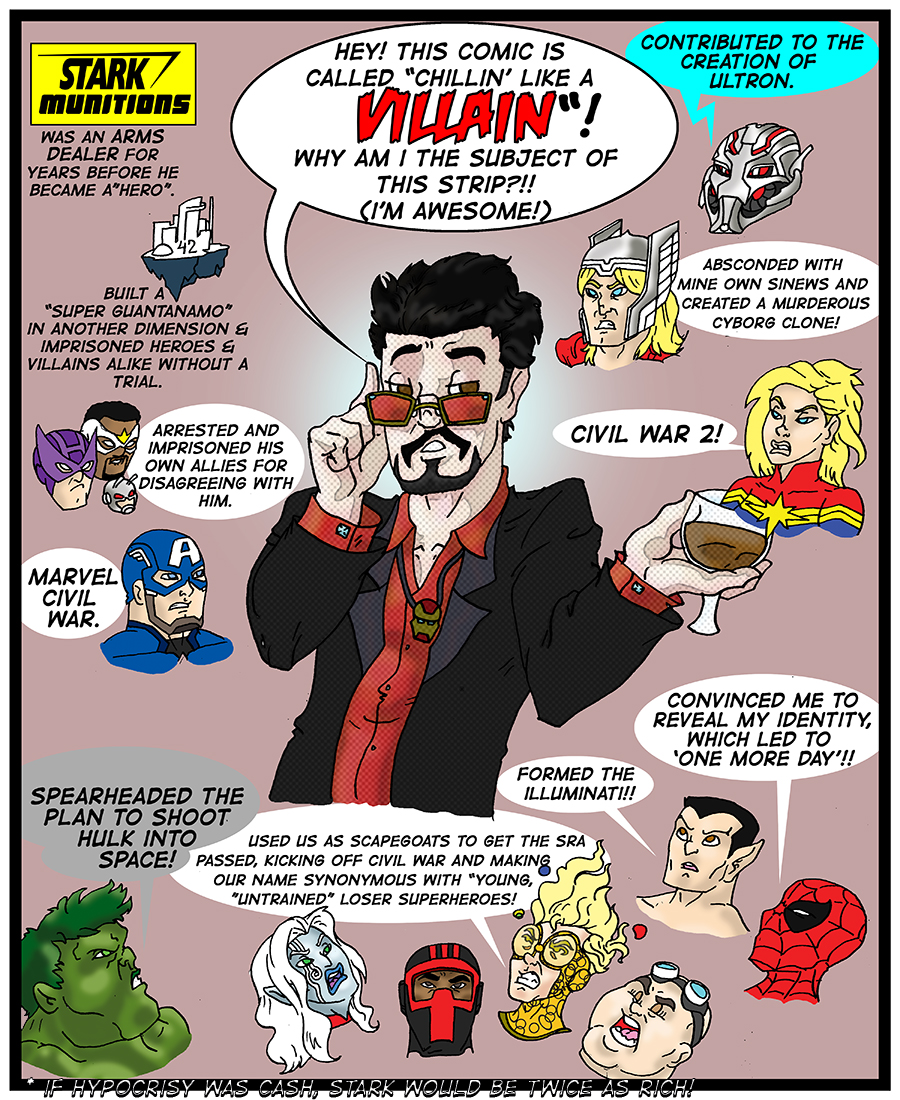 Who's the biggest villain in the Marvel Universe?
Doom? Red Skull? Magneto? Loki?
NO!!
Tony. Fucking. Stark.
One of the two fictional men that I have IRL hatred for. He and Walter Peck can both take a long walk off a short space station, as far as I'm concerned, and drag Chloé Bourgeois's scrawny little bitchy ass with them!

These are just the things I could think of off the top of my head while making this strip, and, yes, they are occurances across multiple Marvel media & realities, but, do ya notice a pattern?!

What do BOTH of Marvel's Civil Wars have in common? Tony Stark!

What usually CREATES a majority of Iron Man's own villains? Stark tech and Stark ARROGANCE!

From what I understand from back issues and various discussions I've been part of and privy to, Stark mostly sold weapons to Uncle Sam back in the day, but, he wasn't very discriminating in the grand scheme of things and would sell to whomever would meet his price - no matter WHO it was - until that whole thing with the shrapnel in his heart.

As far as Ultron goes, I dunno what pisses me off more - That in most modern Marvel media, he gets CREDIT (or should that be BLAME?) for creating a sophisticate AI such as Ultron, or that in these media, he's basically STOLEN Hank Pym's (for better or worse) legacy!

In my opinion, Stark is directly responsible for the murder of Bill Foster by the Thor CyberClone!

The thing with the New Warriors REALLY ticks me off! I was a HUGE fan of the original New Warriors, and knowing that they brought them back from cancellation as some dumb ass, misguided stab at 'relevance' in the form of a stupid Scooby-Doo'esque reality show, only to throw them under the bus for the sake of Tony Stark's goddamn Civil War just grinds my gears to THIS DAY!!
The icing on that particular hypocrisy cake is that Tony Stark's entire power-grab, excuse me, "campaign" to register, 'properly train' and regulate over superheroes is coming from a "hero" who, himself was NEVER FUCKING TRAINED!!
Stark created a flying tank, got in it, and prettymuch just said "Well, I'm a superhero, now!"
Without that damned suit, Rich Boy can barely throw a punch, and damn sure can't BLOCK one! Everything he knows about fighting, he learned from Captain America, which ain't MUCH since he never pays attention, thinking that technology solves everything-- even in a damned FISTFIGHT!!
If I typed out all the instances in alternate and parallel universes and timelines (and even The 616) when Stark took over or destroyed the world, or simply went rogue and BETRAYED the Avengers, it would be a two hour read!
Tony Stark is the fictional epitome of all the bile that Millennials have for One-Percenters in real life:
He's a self-centered rich asshole who thinks he's always right and above the law. He does what he wants and damn the consequences because "Tony Stark Knows Best" and everyone else is WRONG!

I think what I resent most about him is the way he always just skates away from everything he's done, forgiven by friend and foe alike, and smelling like a rose. Everyone falls all over themselves to clean up his messes, Marvel-wide, and all is forgiven because "The World NEEDS Tony Stark"... BULLSHIT!
In several ways, Marvel's entire reality has been semi-rewritten to save him from death or undo the effects of his narcissistic psychosis!

Huh. Never seen it put as starkly as that.