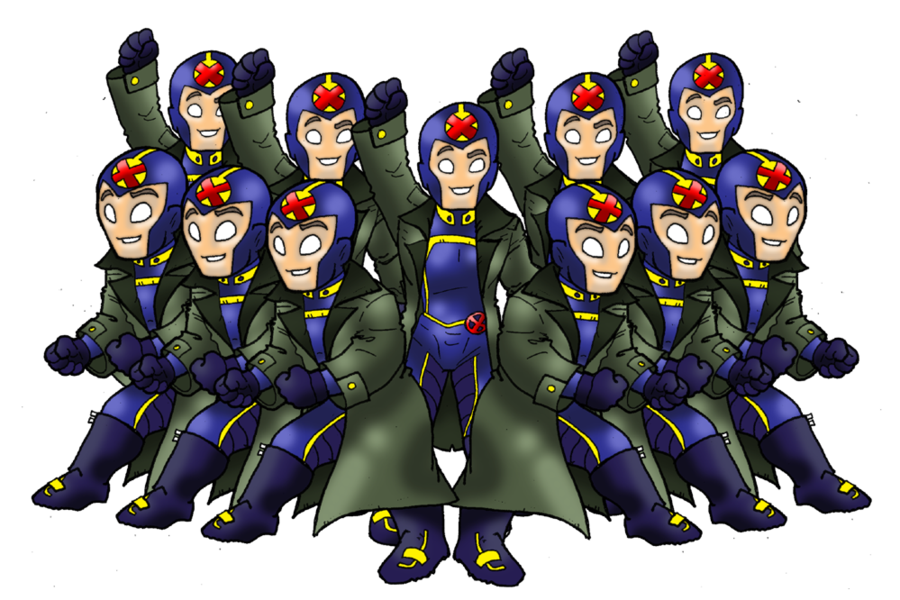 Here's a chibi shot of my very favorite mutant, Jamie "Multiple Man" Madrox.
I am not at all satisfied with the way Marvel has misused him over the last 2 decades. Peter David did a lot of great things with him, which were then retconned.
Then, Peter David did some good things with him that could have been better, but, in the end, they were still awesome.
Now, he's in Marvel Limbo.
Marvel is about to reboot their comic boolk universe (most likely to be more like the Cinematic Universe, but that's an angry fanboy rant for another day.)
As one would expect, the flagship/movie characters will be everywhere, but sadly, second-stringers like Jamie will fade into obscurity.
Worse yet, they will probably bring him back as a villain... AGAIN.

What do you think of Calvin Rankin, AKA "The Mimic" - he was incredibly cool when he first appeared (His power is to copy the mutant powers of any mutant within about a dozen yards of him, and retain those powers from then on so long as he remained within about a mile of the person whose powers he's copying (Kind of like Rogue, but he doesn't need to touch someone to copy their powers and doesn't affect them at all when he does so) - he was a member of the X men for about 3 issues (This was very early on in the original X-men, when Cyclops was going through one of his "am I really good enough to be the leader?" phases.

His powers changed a number of times since that first appearance, but I always liked the first version, particularly since he had a cool costume.

As far as I know, he has been the only member of the X-men ever who was a Mutate and not a Mutant.

I've not seen much of Mimic in the actual Main Marvel Universe (616), but, he was one of the main characters in a Marvel title called The Exiles.
It was a parallel universe version of him, but still, he was pretty kick-ass. You should read that title if you haven't already.

I think that a Rankin/Madrox teamup would be pretty much the ultimate. Not only would Cal get Madrox's duplication power, as soon as he copied the powers of whomever they're fighting, they would be outnumbered by foes with their own powers.