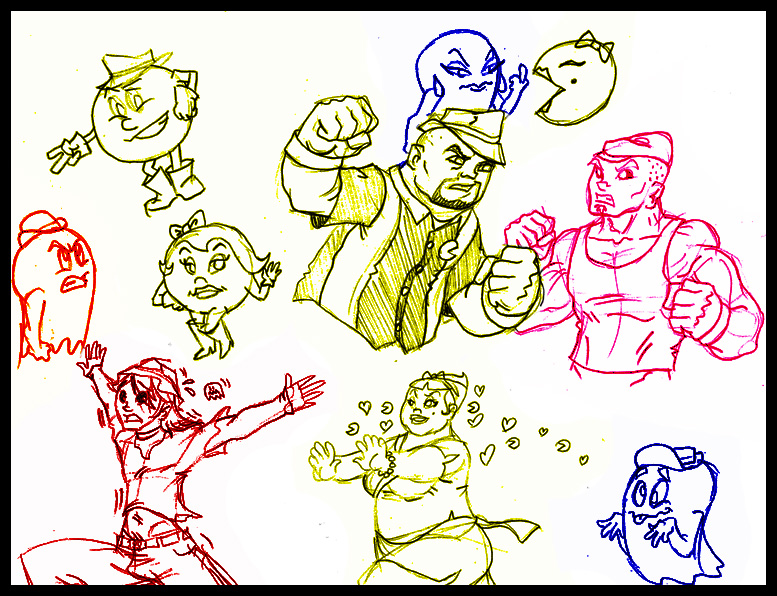 Ooookay.
So. To reiterate:
Once upon a time, some years ago, I had a weird dream.
I made a picture based on it.
That pic can be found in an earlier post on this site.

Many times over the last few years have I looked at that shot and thought; "I could do something with that".
Lately, I have had Pac-Man on the brain, specifically the old 80's Hanna-Barbera cartoon and the dream and the picture I made.
about 4 months ago, I scribbled down a lot of things and brainstormed a half-assed story regarding the aforementioned.
The pic above is about the 6th scribble I made that day.

Within: Pac-Man ("Packy") and Ms. Pac-Man ("Pepper") in the style of the old toon... as well as Clyde, Sue and in the bottom right corner, Inky, and video game version Ms. Pac-Man.
Below Sue is my version of a humanized Pac-Man, created to correspond with the dream.

The GhostMonsters were killer human-style androids in my dream, so i made Packy and Pepper human as well.
Since Pac-People are all circular, I figure in this... alternate world, all the Pac-folk would be bulky, round, chubby, voluptuous, etc...

In the cartoon, Packy wore a fedora, boots and gloves (and nothing else, but, I am not gonna turn this into redundant Rule 34 crap). So, after giving a bulky guy a fedora, I resolved to try and stylize him based on that.
I went thru a fair few fashion ideas. Out of randomness, I gave him a Vandyke goatee. This made me think of John Goodman in The Big Lebowski. One bowling shirt later, Packy was made. Seeing that style is as sort of a 'rockabilly' off-shoot, I went that route with Pepper as well.
Stretch-pants, a bow-wrap in her hair, which has bangs, (and the bangs are vaguely shaped like Pac-Man), the trappings of her video game counterpart (red lips, beauty mark, Marylin Monroe-style thick eyelashes..), the hair color of her cartoon counterpart, as well as the gloves and boots, a voluptuous shape, and viola'!

The ghostmonsters' personalities are prettymuch mapped out for me via the cartoon. They were my favorite part, after all. They were the reason I watched the show.
Packy and Pepper were cool, and all, but, Clyde's anger management issues, Inky's dim-witted insanity, Pinky's tough-guy 'tude, Blinky's stuttering, stammering nervousness and Sue's sarcasm were always far more interesting to me than Packy & Pepper's goodness and optimism.
They were FUN! This is probably why I dreamt of THEM instead of Pac-Man.

I decided that Packy and Pepper would be a lot TOUGHER in my imagination.
They're younger. They belong to a "subculture". They aren't saddled with a baby. They should be able to kick some ass, especially seeing as I haven't yet figured out a way to incorporate their EATING their enemies into this anthropomorphized scenario.

Clyde is the leader, so it stands to reason that he and Packy would be natural enemies, but, for this version, i see Pinky as being the strongest and toughest of the GhostMonster Droids, so HE and Packy would go head to head more often, as depicted above.
Also, for some odd reason, I have it in my head that Pepper is greatly attracted to Blinky, who, of course, is a bundle of nerves around her, even more than usual, for just that reason. (Packy is ALSO not to fond of that.)

Blinky, Inky, Clyde, Pinky and Sue are ©the 80's by Namco and Hanna-Barbera