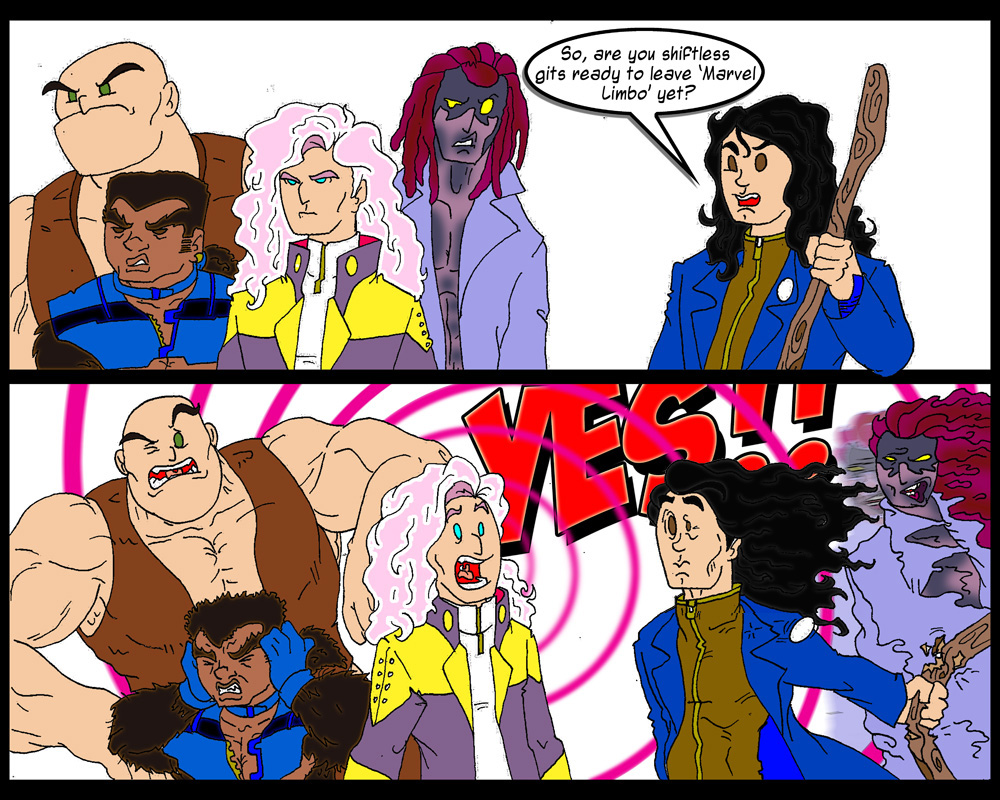 A short comic regarding my favorite group of Mr. Sinister's minions. (Eat THAT, Marauders!!)

It's been, what? over 20 years since the Nasty Boys have been seen in full force? I figure that they are just languishing in Marvel Limbo, waiting for their chance to be seen again in a cartoon, or, God Forbid, even one of the no-doubt numerous new movies in the X-Men franchise.
We know it ain't gonna happen, but a fanboy can dream, right?

You remember 'em, yeah?
Slab, aka Kris Anderson, the size-changing muscle of the team.
Hairbag, aka Michael Suggs, one of Marvel's Merry Menagerie of Wolverine Wannabes.
Ruckus, who absorbs ambient noise, amplifies it to sonic attack levels and screams it back.
"Gorgeous George" Blair, whose malleable bod is made of a tar-like material whose density he can change at will.

Most folks only remember these guys from the X-Men cartoon from '92, where, for some odd reason they all got really BAD, overwrought foreign accents. I find this ironic because they were all American in the comics, except for the gent to the far right of panel 1: their field leader,
Patrick Mahony, aka Ramrod, who was Irish... and got DEPORTED. I wonder if that's why he wasn't in the cartoon?

Still, I miss these guys, and I wish Marvel would bring them back. Unfortunately, all MY favorite characters tend to get the SHAFT!!

Now that that book is over and Peter David is on to other things, the chances of us seeing the Nasty Boys again are slim. Even if we do see them, they will probably be on the wrong end of a Mutant Massacre™ just so some writer can have a higher bodycount and spur the X-Men to do... something.