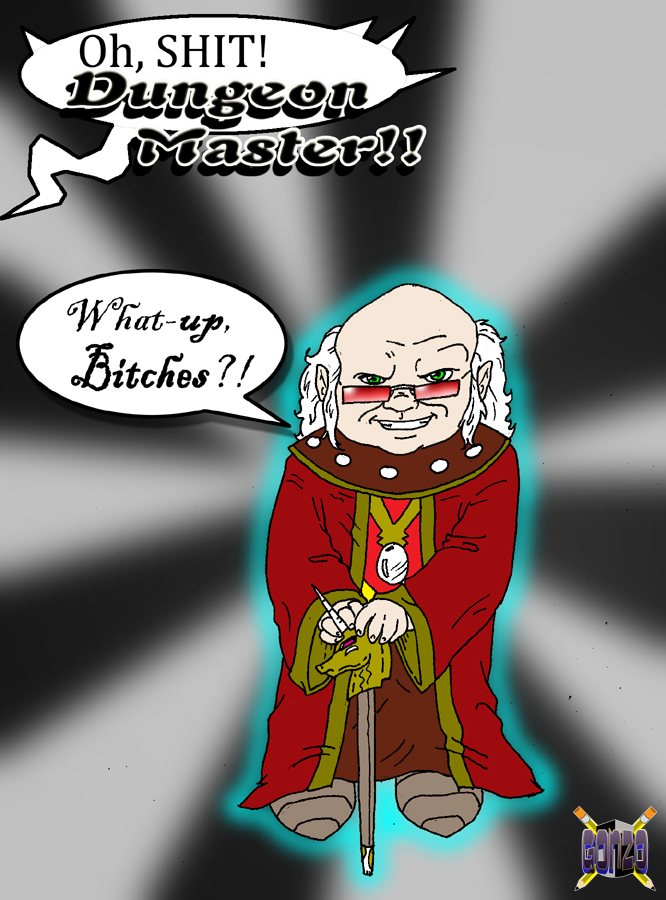 Whenever I watch the old D&D cartoon series, it always tickles me that when DM shows up (out of nowhere, like he does) anyone who isn't one of the Young Ones
(civilians, enemies, monsters that have the power of speech. Basically all the natural denizens of The Realm) react with that awestruck tone of reverence that says "The Boss is coming! Look busy!!"
They all seem to gasp his name with either the hushed reverence of The Second Coming, or with a guilty terror of a kid who broke something and Dad's car just pulled up in the driveway.
Either way you slice it, DM gets RESPECT!


Having recently seen the D&D movie that they made not long ago, I wondered why it wasn't patterned after this cartoon, especially since raping 80's nostalgia is such big biz nowadays.

Then, I thought, it's just as well. If they did remake the toon into live action, the Hollywood Shit Parade would set it up as some "hip" Judd Apatow monstrocity with Seth Rogen as Hank, and Verne "Mini-Me" Troyer as an Ebonics-spewing Dungeon Master who fancies himself a pimp, and speaks in outdated urban slang, or something equally loud, stupid and offensive.

Or add Jack Black or some other asshole Smarmasaur stinking it up.
("Smarmasaur". heh. Did I mention I just spent a week reading Questionable Content from beginning to current?)

A horrible thought, which, sadly, I found kinda funny for it's own sake.
but it did give birth to this deviation.
Maybe it's because I've just finished watching Black Dynamite.