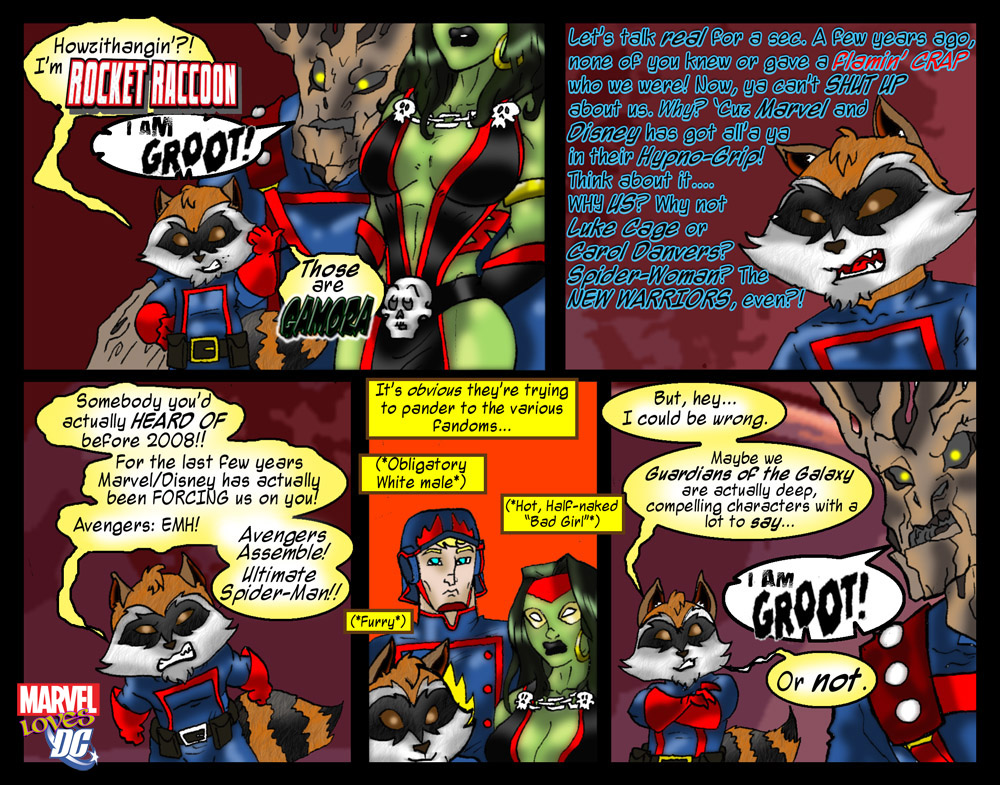 I admit it, I was totally ready and willing to hate on Guardians of the Galaxy. I saw it, and, wonder of wonders, it was an amazingly good movie.
I’m not surprised at that. Marvel has really stepped up their game in the last few years… movie-wise, at least.
No, I was prepared to hate it due to the onslaught of marketing. While, I am sure that everyone knows the characters’ names by now. If you’ve forgotten the name of the anthropomorphic tree, just ask him. He’ll tell you. but, before the “Annihilation” storyline back in ’08 or ’09, NOBODY save for Marvel’s 638 space-fans had even HEARD of Peter Quill or gave a SHIT about Rocket Raccoon. Don’t even lie and pretend that you did.
So, as a dyed-in-the-wool superhero fan, I, at first thought that maybe The House of M(ouse) would have been better off spending those Disney Dollars making a movie that paves the way for another facet of the Marvel Universe a little closer to home. I hear that Dr. Strange has a movie coming sometime in the next DECADE. Maybe that should have come sooner. Add that to a Blade remake and/or a better Ghost Rider franchise and perhaps jumpstart the Midnight Sons. Those guys may be ‘B-list’, but at least they were KNOWN!
I never thought it was gonna be a bad movie, but I had my doubts about the characters.
But, if nothing else, this proves that good writing can make stars out of ANY comic character! Thus DC (and Dark Horse, Image and even more Marvel and anyone else) has ZERO EXCUSE as to why (Insert -SuperHero X) can’t carry a movie!!

Hey, I still have the Rocket Racoon mini series from 80whatever. Still wish they'd given Waldo the cyborg walrus a cameo but good to see Howard.