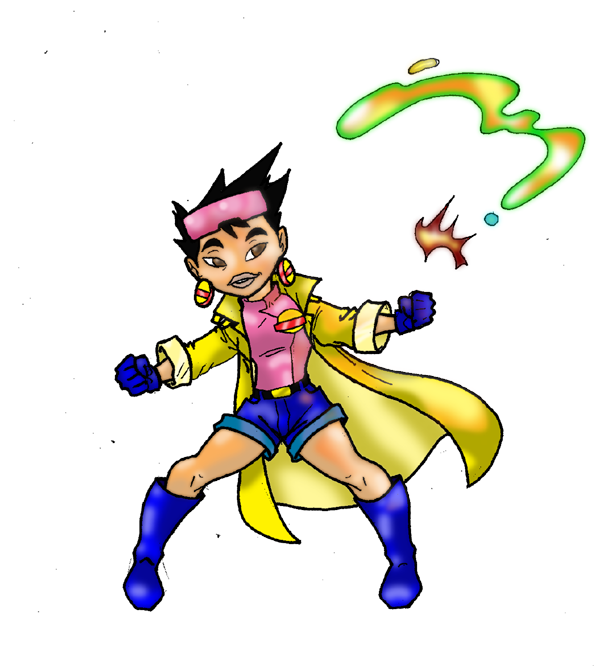 living homeless in a Beverly hills shopping mall, Jubilee followed 4 of the most glamorous women she'd ever seen through a teleportal to Australia... like so many of us would.
The spunky mutant saved Wolverine's life from the Reavers and since then became an X-man... or, rather, became their mascot.

One can tell she was designed to be a sidekick for Wolvy. maybe even as a joke, seeing as her original Jubilee Suit mirrored the colors of Robin, The Boy Wonder.
Soon enough, though, all the green in her outfit turned to blue and the red-breasted tunic was made pink....
She STILL looked like Robin.

Anyway, during various adventures, Jubilee's powers fluctuated wildly. From blowing the Mandarin's castle to bits, down to barely being able to blind foes with a light show. Yet, she, like so many others has been classified as "potentially one of the most powerful Mutants in the World".
(Just like Xavier, magneto, Jean Grey, Iceman, Cyclops, Havok, and scores of others... but, for some reason, I have never read that said about Storm, who is, basically, Mother Nature Herself.... go fig.)
Jubilee was almost always dismissed as the loud-mouthed kid, and not "officially" an X-Man, even though Kitty Pryde was a full fledged X-Man when she was her age.

The bad part is that, back in the day, Jubilee had a huge fan base, and was easily as popular a character as Gambit or Psylocke, or even (ALMOST) as much as Wolverine. this, I believe is why the 4 of them were almost always teamed up for a while. They were sort of a dream team, but, Marvel began writing Jubes' character as an annoyance, more than a teen with heart and chutzpah.

After more adventures with Wolverine than most people can survive, and years with the X-men team (which she didn't seem to AGE at all), Jubilee was shipped off to Emma Frost's Massachusetts Academy to form Generation X with other nameless, and mostly Morlock-ish (The males, as all the females were "HOT", as is comic book law) young mutants, where she got cast as not only the YOUNGEST of the "kids", but being the whiny brat who thought she was too good for the 3rd string team because she was an X-Man.
(True, but still..)
After her friend and potential love interest Everett "Synch" Thomas was killed by the book's writer, er, rather, Emma Frost's sister, and the book ended, Jubilee disappeared. It was said that she and Gen X teammate, Skin, were sharing a crackerbox apartment in Cali, where Jubes shook her all-but-nonexistent booty in hip-hop videos to pay the rent.
I am dead serious.
Soonafter, she was found crucified on the X-mansion's lawn. She survived. Barely. Skin did not.
She milled around the background of X-Men comics for a few months, not really doing anything until M-Day, when she lost her powers.
Depression hit, of course, as, politically speaking, a mutant without powers is NORMAL. Without that genetic difference making them targets, Marvel's mutants, who could just blend in and live normal lives, all decided to become whiny martyrs.
Jube then joined the New New Warriors, which, seemed to be populated by depowered Ex-X-Men using tech scavenged from supervillains in order to rebel against the Marvel Civil War's superhuman registration Act... even though none of them were superhuman.
"Wondra" and the rest of the NOT New Warriors went the way of the dodo when the Civil War crossover became irrelevant, and Jubes wound up back with the X-men on Utopia where she was promptly turned into a fucking VAMPIRE to cash in on the Twilight movies.
Now, trying to fight "The Hunger™", as all "good" vampires do, Jubilee is the victim of a stupid trend that had played out before she was even a part of it.

Over the years she went from a cool, spunky little punk chick to a whiny milquetoast little brat to an overdone gimmick.
If that weren't bad enough, as one of the relatively few ethnic characters (if you're, y'know, not actually counting The X-MEN, who are, without a doubt the most ethnically diverse superteam in existence), most of her artists seem to keep conveniently forgetting that she's actually CHINESE!
Anyone see the Generation X TV movie?
Thought not.

Another good character with the potential to become great,
SHAFTED.

Great pic, but I still loathe the character ever since her first appearance.

<nerd rant>
I was following the Inferno arc and Sinister & Polaris were just about to kill everyone when Long Shot comes out of nowhere and says "You'll have to get through me." Being a huge Long Shot fan, I waited breathlessly for my next issue to come in the mail, only to find out the arc continued in X-Factor and now we get to see Jubilee be an annoying mall rat. Then they made her a Kitty Pryde knock-off while the Reavers were actually awesome villains. Then the cartoon came out with Jubilee front & center, which led to a crazy big fan base.