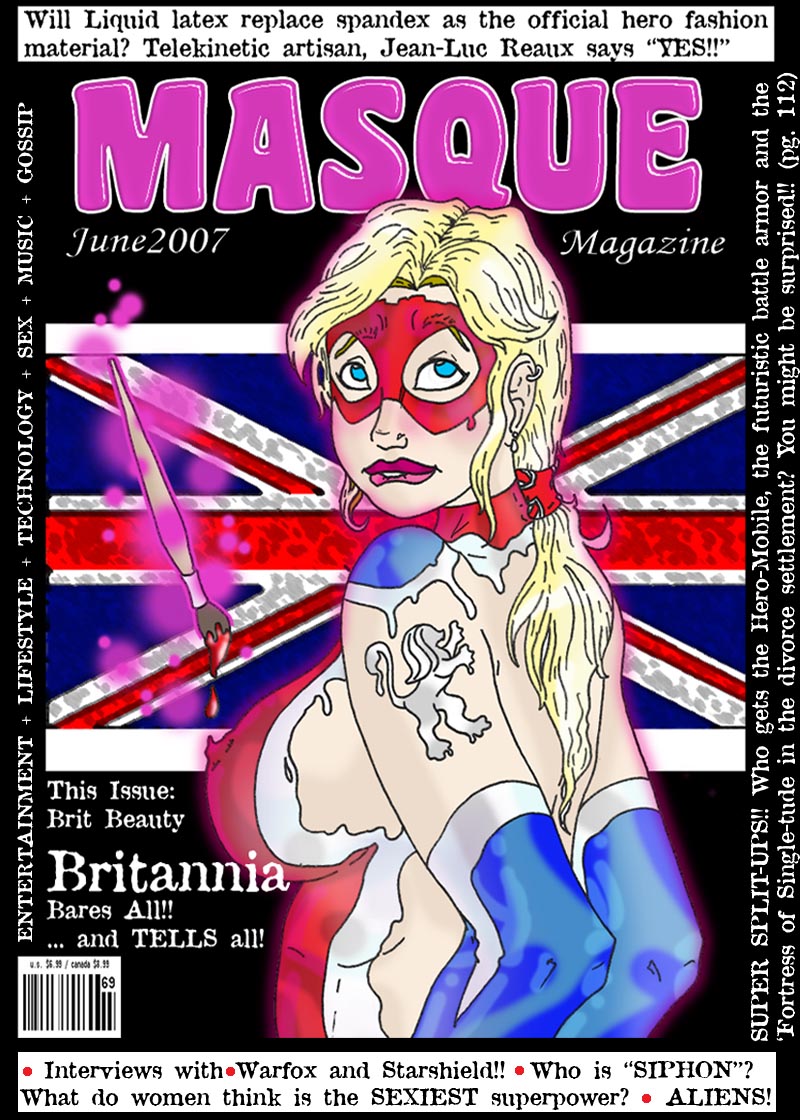 Masque Magazine is the kind of magazine that I would have liked to have seen when I was younger.
Or made.
So I did.
Sorta.

I melded it into my own projects by way of it's creator/publisher, Damian Gray. A photographer and entrepreneur in Universe 84013-G who found that he had the ability to travel from parallel Earth to parallel Earth at will. He was fascinated by superpowers and superheroes, but,
instead of becoming a superhero, or whatever, he learned to do what he loved. Photography, journalism and such and founded a magazine in each of the Earths he traveled to.
(Each one that had superheroes, anyway.)

Here is June 2007's Masque, featuring Britannia, a heroine by the ever cool, but sadly long missing from DeviantArt, BuckeyeStar
:iconbuckeyestar:

-if anybody knows Buck IRL, tell him we miss him.
This was the first of the Masque covers that featured fanart of someone else's OCs.
=================================================
In of parallel reality #82214-R, Britannia and Warfox are best friends.
(in 'this' reality, they are archenemies).
One would take one look at the two of them together and see that they are as opposite as night and day, and at first glance, one would assume that if the two of them are indeed friends, that somehow, Warfox is the world's meanest superheroine, but in reality... THIS reality, anyway... it is Warfox who got her friend Brit to turn to the Dark Side™. In this parallel universe where Great Britain is the world's biggest superpower, France is a 3rd world country and Canada was the greatest enemy of the U.S. during the Cold War, beautiful, blonde, bubbly Britannia is the world's nicest supervillain.
When that reality's publisher of Masque Magazine, one Damon Gray, initially approached Warfox to be the covergirl for the interdimensional men's magazine, Brit just smiled slyly, commenting that her wild friend would probably be naked before that sentence ended. this sparked a small argument that ended in a "triple dog dare" for Britannia to pose in the magazine, not WITH Warfox, but INSTEAD of her.
Neither of them thought the oddly chaste and semi-virtuous villainess would have the guts to go through with it, but hey, if a girl can pulverize an entire precinct of British police with her bare hands just to steal her dearest friend an expensive and rare emerald and diamond necklace for her birthday (not to mention get all her Christmas and birthday shopping done for the year all at the same time), then surely a little tasteful and artistic nudity and bodypaint wouldn't be the end of the world, now would it?
... aw, look, she's blushing a bit.
========================================