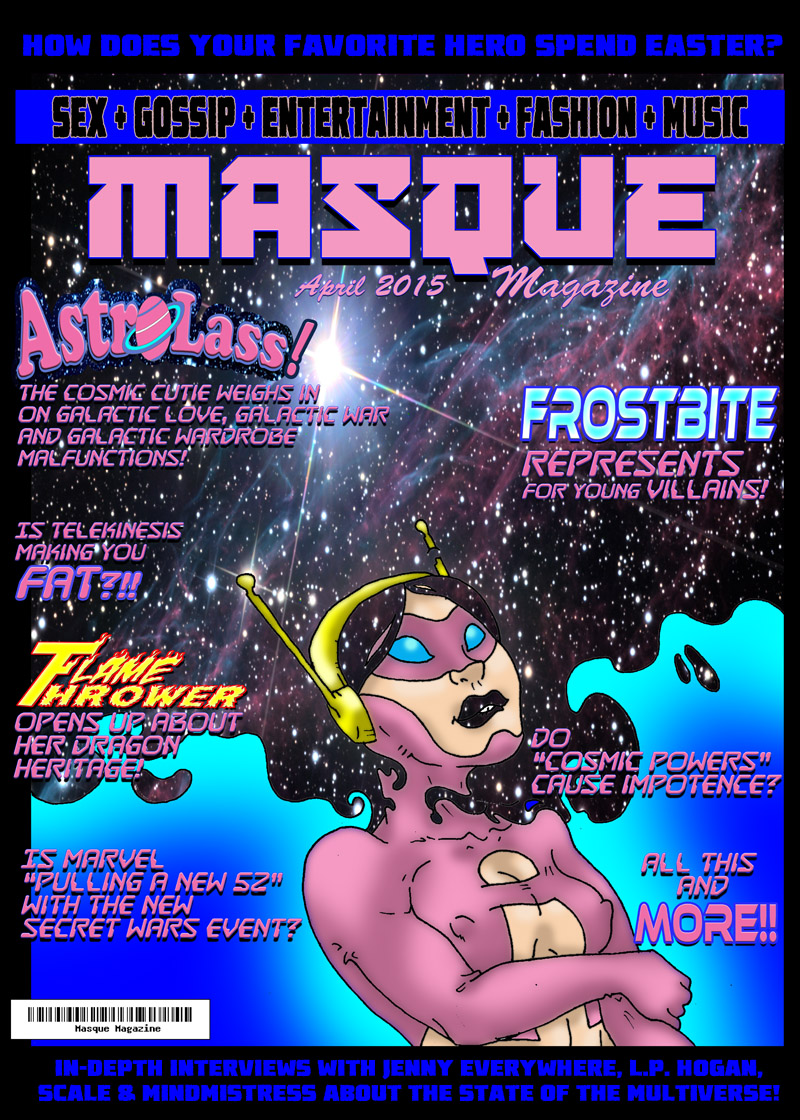 Guess what's back?!
(after what was a 5 year hiatus)

For those who don't know, Masque Magazine is the kind of magazine that I would have liked to have seen when I was younger.
Or made.
So I did.
Sorta.

I melded it into my own projects by way of it's creator/publisher, Damian Gray. A photographer and entrepreneur in Universe 84013-G who found that he had the ability to travel from parallel Earth to parallel Earth at will. He was fascinated by superpowers and superheroes, but,
instead of becoming a superhero, or whatever, he learned to do what he loved. Photography, journalism and such and founded a magazine in each of the Earths he traveled to.
(Each one that had superheroes, anyway.)

-This project originally started in April of 2007.
I can't believe that it's been that long.
A few of them have been lost to history, computer crashes and moves. If anyone reading this was following my old DA space

This month, the MM crew has travelled to a universe that seems to be just a bit naughtier than others.
For this month's cover story, we got an interview with the premiere heroine of Reality 53883-V known as ArtroLass! She fancies herself a good girl, but, as our interviews found out, she has a way of losing articles of clothing during battles... and has, on more than one occasion, she admits, had sex with villains, madmen and monsters in order to save the galaxy. It's even rumored that once, she had 'relations' with a rogue god in order save reality itself. Though, that hasn't been confirmed.
==================================================
Astrolass is a creation of Johann-Octavius X. Gans
FlameThrower by Ave Messer
Frostbite by Robertg Pryor
L. P. Hogan & Scale by Hogan and friends
Mindmistress by Al Schroeder

The character of Jenny Everywhere is available for use by anyone, with only one condition. This paragraph must be included in any publication involving Jenny Everywhere, in order that others may use this property as they wish. All rights reversed.

Oh cool! SO that's a bran-new one? Astro Lass is a super heroine after to my taste!

The first of these covers I ever noticed, and all because my own character's name appeared on it. I'm selfish like that sometimes.

But I still appreciate the logo, and really need to get to compensating you for the other logos you gave me. It's actually not as easy as I thought putting together an introduction into the Deviant Universe, where I was planning to cameo the Misfits.